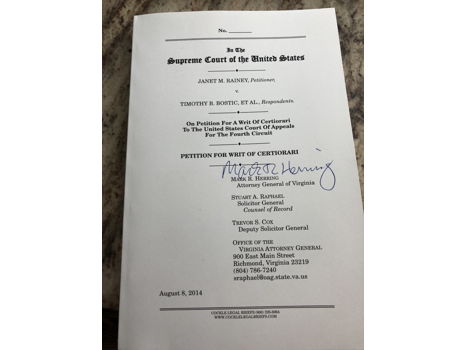 Bidding on this item has closed!
This petition was declined by the U.S. Supreme Court in 2014, upholding a lower court ruling that Virginia COULD NOT BAN gay marriage. Within weeks of taking office, Attorney General Herring announced that his office would no longer defend Virginia's gay marriage ban and would instead argue for the Plaintiffs.

While it was not until the following year that the Supreme Court ruled that gay marriage was the law of the land, the denial of this petition was an important part of the legal proceedings that led up to the final decision.

Donated By: The Honorable Mark Herring